Hello everyone, I would like to introduce the project serverlessDB for HTAP. serverlessDB is a database for severless services based on TiDB, which can dynamically scale up and down compute and storage nodes based on business load changes with zero user perception. It provides the following features. 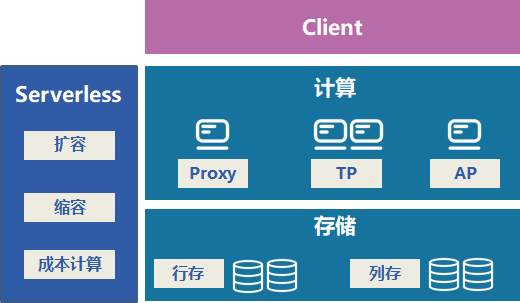 ​ From the above description, there will be three roles for the proxy: pure compute node role, pure proxy role, and mixed compute and proxy role. These three roles will be dynamically adjusted online based on the business load.

The lastest progress of this project is:

Limitations:
1.It is difficult to cope with scenarios where the business load changes dramatically, e.g. TPS rises from 100 to 100W in a very short period of time, leading to business performance fluctuations and some SQL delays reaching 5s and lasting up to 30s.
2.It is difficult to establish the most correct business load model and there is a risk of unbalanced load on some of the computing nodes.
3.Because of the introduction of the proxy, there will be performance loss, ideally, performance loss is expected to be kept within 15%.

Thanks for sharing you project @shipx123 ! Welcome to the TiDB community.

This topic is not a proposal to be accepted to the TiDB codebase but your project in the TiDB ecosystem calling for participant and contribution. Thus I remove the proposal tag for you.

Thanks for your attention.

I’m watching your project and found it is a bit weird that commits pushed without discussion or pull request. That makes the evolution of the project hard to understand.

It seems that you guys develop and discuss internally and later push the commits onto the open source repo, which is quite like so-called “open source code only”.

Would you mind to create an issue to track development task and later submit a PR close that, with communication happen on GitHub and we who are interested in the project can participate?

See also this tracking issue, its subtasks and pull request against the subtasks.

Will there be some feature like “remote compaction” or “store SST on s3” to better scale the storage layer?

Sorry @tison , we were discussing the new architecture design of the system, sorting out the internal code and uploading them to Github. We just created some issues about development tasks, and we will develop through the issue in the future. Thanks for reminding!

Sorry @skyzh , there is no plan for this. Now we are only considering tikV storage capacity expansion on the storage layer.